We learned Mrs Haynes is leaving. We learned tessellation paternes. We wrote a Scary story in big writing. We designed water aid posters to stop people wasting water. We peer assed each others scottish warriors.Our next step is to stop talking.

We have been learning about battles which happened in the Scottish Wars of Independence. We found out that one tactic the Scottish used to defend themselves was to use a ‘hedgehog’. We found this tricky to imagine so we made one ourselves with rulers instead of spears. 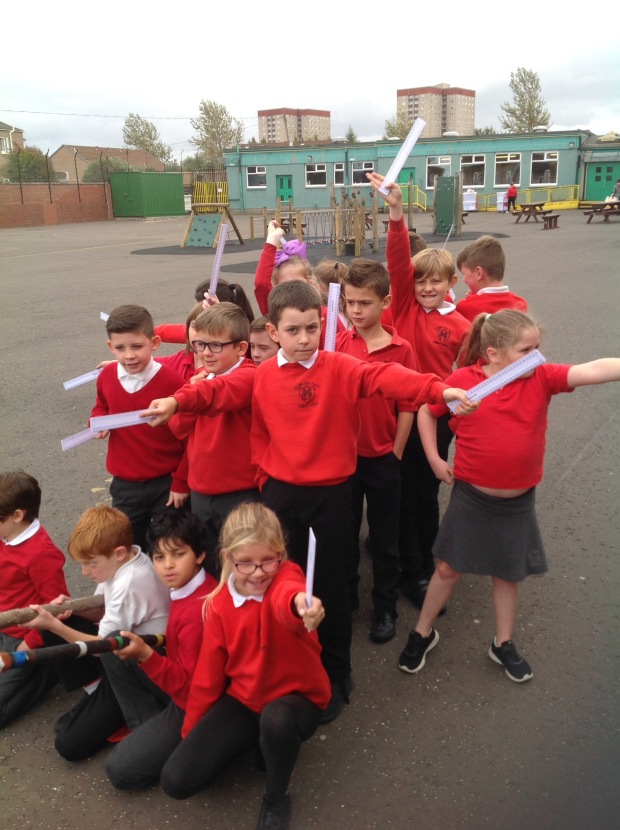 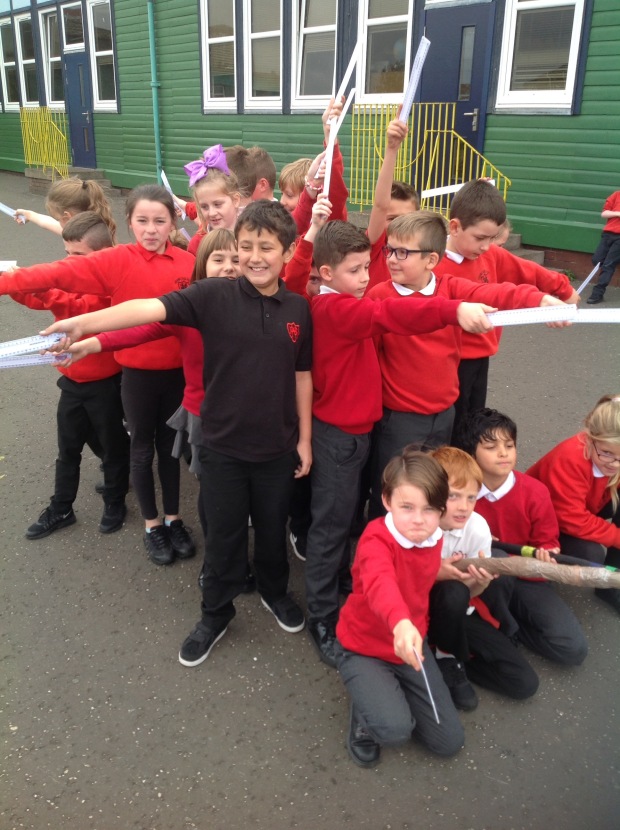 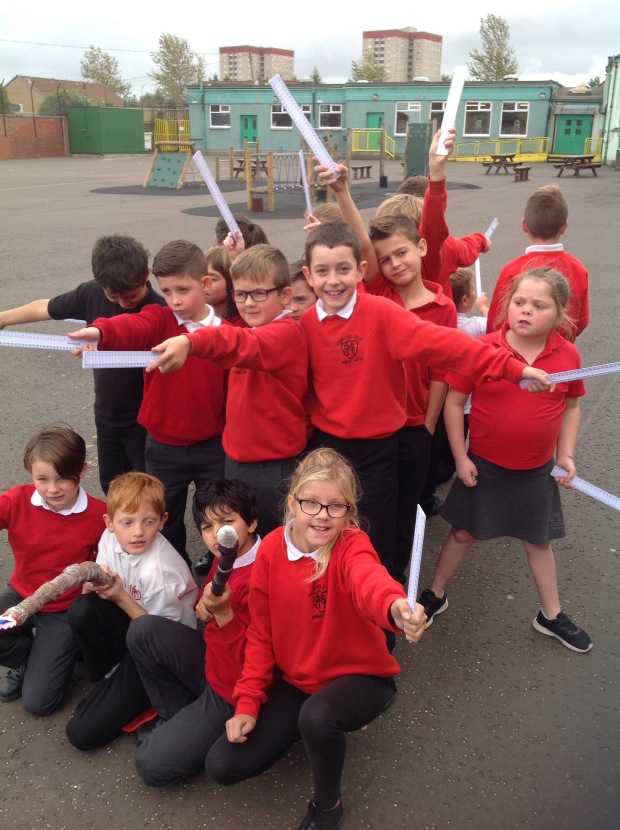 We also took part in hot seating to imagine what it was like to be a Scottish soldier in one of the wars. Here are some of our tough warriors. 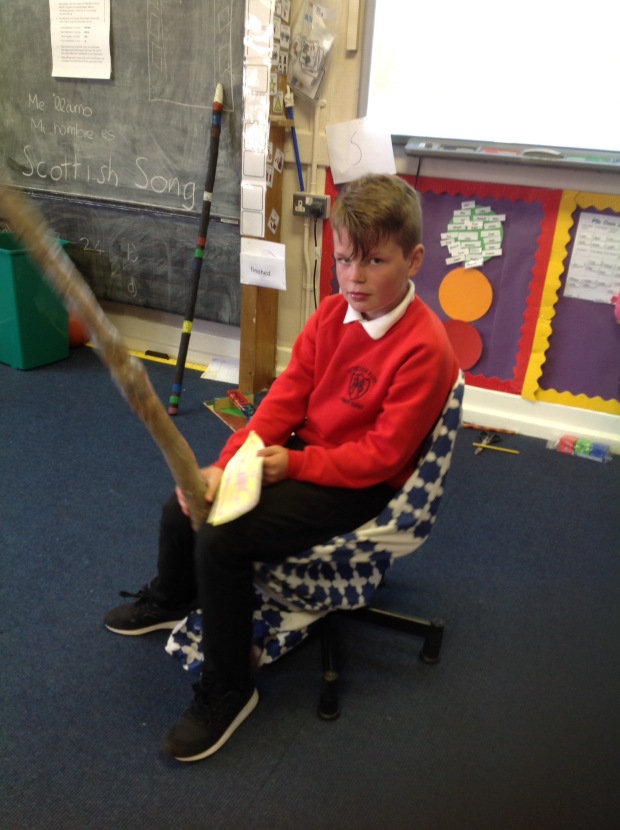 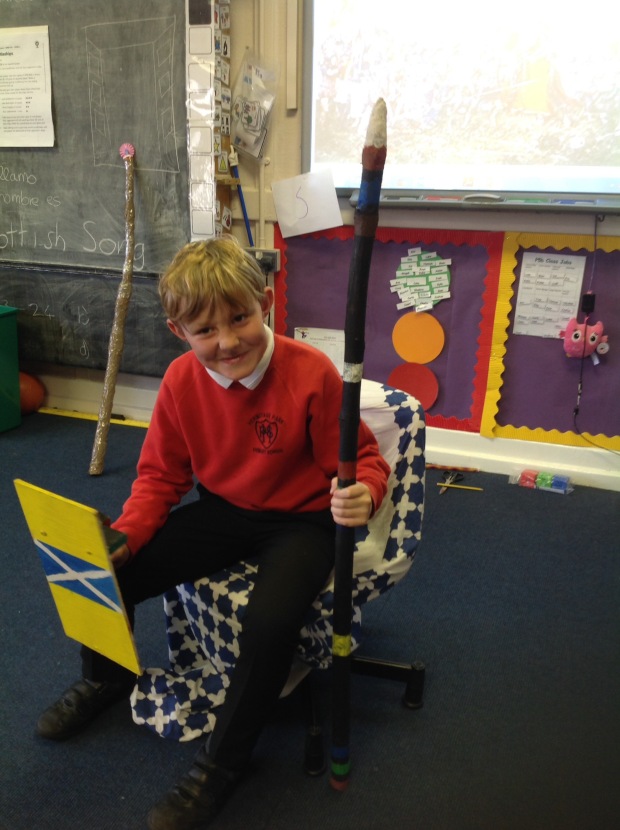 I have learned to speak in spannish.

I have learned how to write an amaganiteve story.
My skills s are to cooperate and improve my teamwork
Our next steps are to listen more
Z I need help with my spelling

S I need help with my 4X tabals
Z I want to lern about where King Alaxander the III deid.

S How to cownt to 100 in french and spannish.

This week we leaned how to make art like Henri Matisse. We could add a bit like abstract in it using line and colour. We learned how to write our new spelling sounds. In ukulele we learned the f cord, c cord, aminor and g7.
Some skills we have been developing are degree angles wit a compass points. We have ben developing are speling sounds. We are working with partners.
Our next steps are to listen a bit more.

We would like more help with openers and cenectives.

I would like to learn more about Willam Wallace in wars.

By Luke and Nicolas

We went outside to help us learn more about compasses. First we had to make a compass using sticks and chalk, we used an iPad compass app to help us find north. We wrote N, S, E and W with chalk. Then we directed each other around the playground using the compass points. 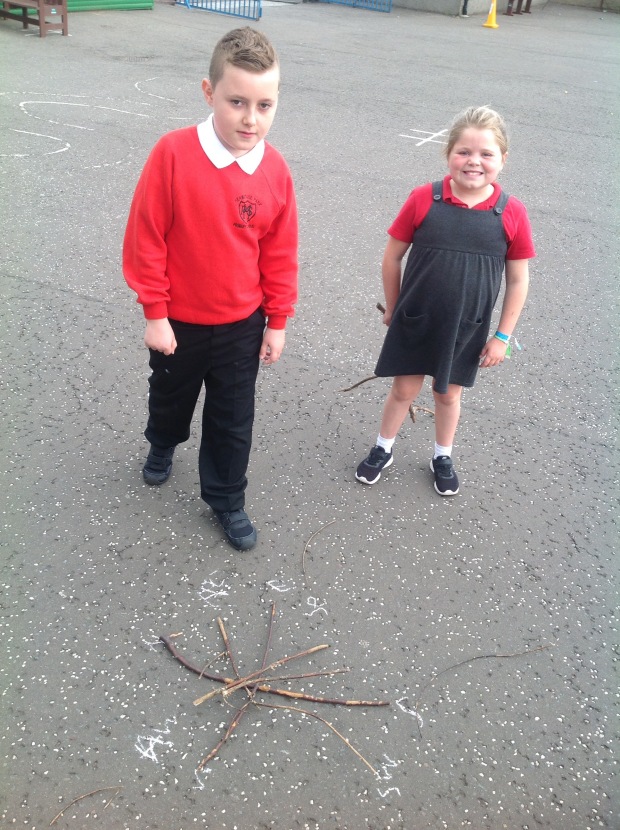 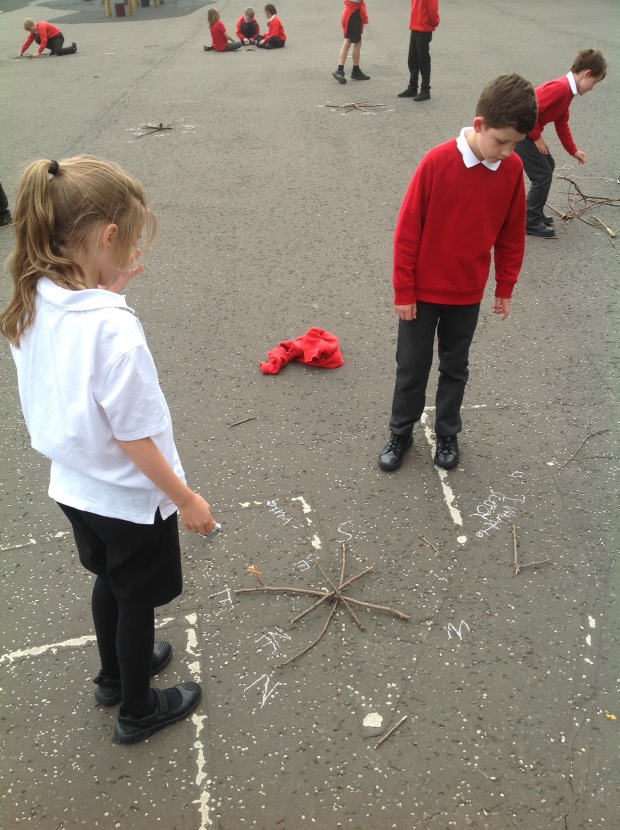 We got most of our spelling words right!
Things that could go better:

We think PE could be trickier.

Wish- Every one claps when teacher claps.

We want to show everyone is listening.

By Aidan and Abi.

This week in maths my group was working on fractions. We mainly had to find out quarters of a number. We found how to find one, two and three quarters. We played a board game to help us learn these. Now that we know the steps to do it, it is easy and a fun way to do some maths.

On Wednesday afternoon Fergus the story teller came and he told us a story using  picture cards this was a Japanese story telling method. It is called Kamishibai. It was about a boy that was called Peach Boy. He arrives in a village in a massive peach on the river. He is adopted by an old man and woman and has to go on a journey to fight the evil on an island nearby. Some of the skills we watched him use when he told eht  story were – he knew the story by heart, he spoke confidently, he did lots of actions and he got us to join in in some of the songs he made up. We think these are all things that will make us good story tellers.

Last week there was an assembly about Fairtrade and our challenge was to bring as many Fairtrade snacks as we can for our playtime and lunchtime. We got a sticker for every snack we brought in. This week we learnt all about how Fairtrade is not just about food but also about sports equipment. We learned that 85 per cent of all footballs sold are all made in one small village in Pakistan. Because they got money from the Fairtrade Foundation they were able to get free education, medical supplies and there was a system called micro credit. This meant they could also borrow money from Fairtrade to start up their own businesses.

This week our investigation was all about sound and how sound is made. We tried to make higher and lower sounds by stretching elastic bands. We worked out that the more area to vibrate made a lower pitch. A smaller area to vibrate make a higher pitch sound. We also investigated what made material made the best sound insulator. We tested a timer in four different materials and timed to see how long it would be until we heard the timer clearly.

We really liked doing freeze frame scenes from our novel Kenuke’s Kingdom. We were trying to show the different feelings Michael had after he was washed up on a desert island. We acted out a lot of different situations that he was in on the island and our class had to guess what the emotion was that he was feeling. We really enjoyed acting these out.

By Caitlin (we hope to have pictures next week – we are having problems with the ipads).

The Pupil Council had such a hard job choosing the winners of the website banner competition! We chose a winner from each class and overall winners. Each winning entry will be displayed for a month. Well done to all the winners! 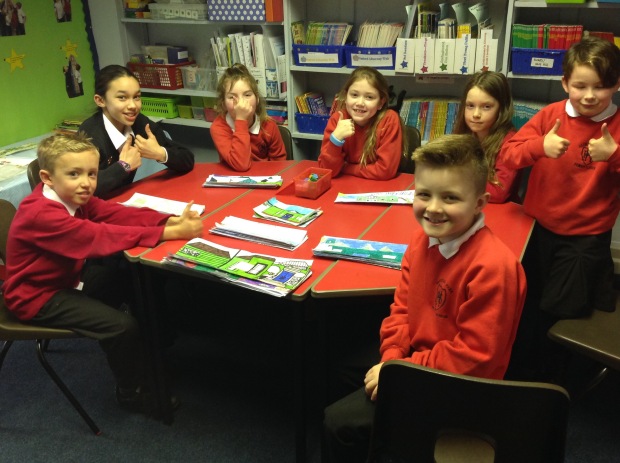 Blackwell’s helped us to celebrate World Book Day today by bringing a stall to school. They brought enough £1 World Book Day books to ensure that each Hermie pupil go home with a free book today. They also offered  a 20% discount on their other books. It was lovely seeing so many parents and carers coming in at the end of the day to visit the stall. Thank you so much Blackwell’s! 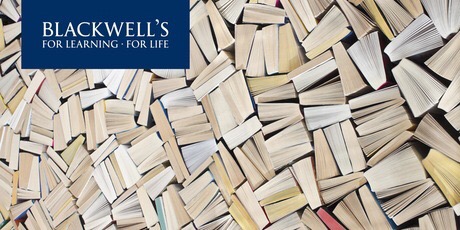 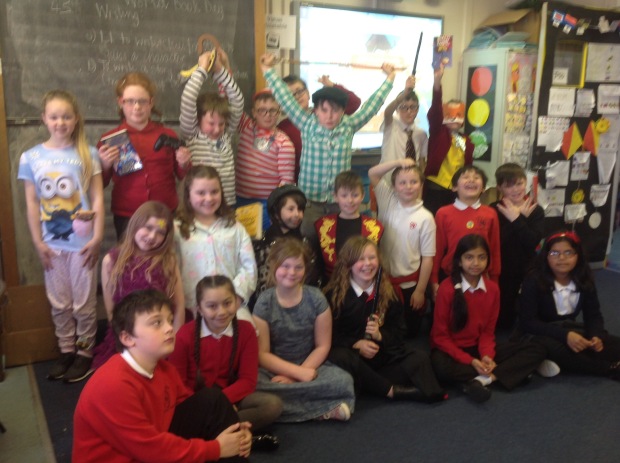 One of our activities was to make quiz cards about book characters and then compete against other teams for points.

Then we wrote a mixed up story. We started the story writing about a pirate character and a setting, then we folded over the page, moved seat and started writing the next three parts at different tables! 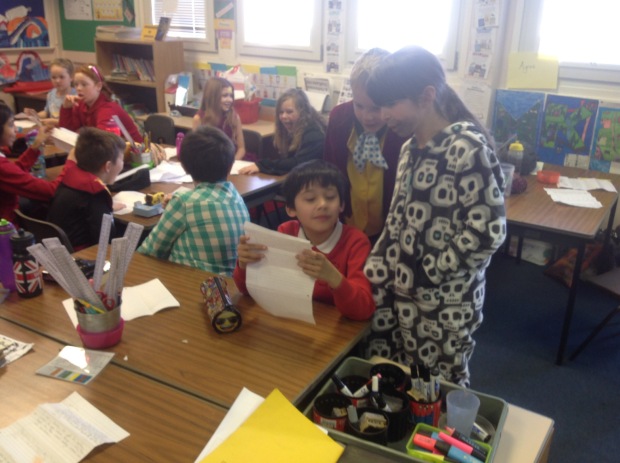 Here we are reading the mixed up stories. They ended up sounding quite strange but some were very funny.
This week we were finding out the results of our science experiment.

We were finding out what happened to egg shells in different drinks. We used egg shell to show what would happen to your teeth if you drank a lot of these drinks. The drinks we tested were, coke, orange juice, milk and water.

In coke after one week the egg shell changed colour it went black. In the orange juice the eggshell blistered. In the milk hard white bumps formed. In the water there was no change to the eggshell. We wrote down first what we thought would happen.

When we looked at the eggshell we got a surprise in the way the eggshell had changed so much. We discovered that too much sugary drink could change the colour and rot your teeth. Fruit juice is very acid and it can also hurt your teeth but milk and water will keep your teeth strong. 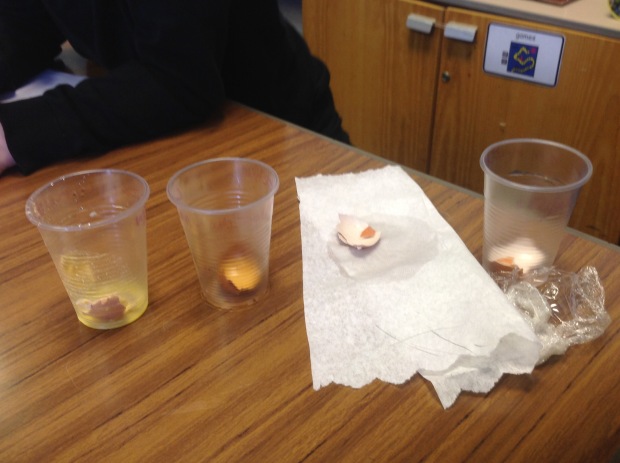