On Thursday it was World Book Day. We all got to dress up. We got to do gym in our costumes. Gym was really fun in our costumes. I was Dorothy and Ruri was Horrid Henry. In gym we were dribbling with the basketball and running at the same time. It was a race and Ruri hurt his knee! Then we went to the library to get a book since it was World Book Day. Ruri chose ‘Awful Auntie’ and I got ‘Daisy and the Trouble with Jack’. We watched the rest of Greyfriars Bobby after that.

This week we did drama. It was great fun! We had to pretend we were at the hairdresser and make a conversation with the words on our whiteboards. The teacher said we had nice, clear voices.

In maths my group were counting in 3s and 4s and we did a times tables worksheet. Ruri’s group: We were counting in 10s with big numbers like 972. We also added and subtracted 2 digit numbers on a number line.

We learnt about Alexander Graham Bell too. He was born in 1847 and his mother was almost deaf. He poured acid on his leg when he invented the telephone.

Drama. Practising for our group performance.

Drama: ‘At The Hairdresser’

Celeste told us a story about a witch.

Reading from ‘Alice in Wonderland ‘. 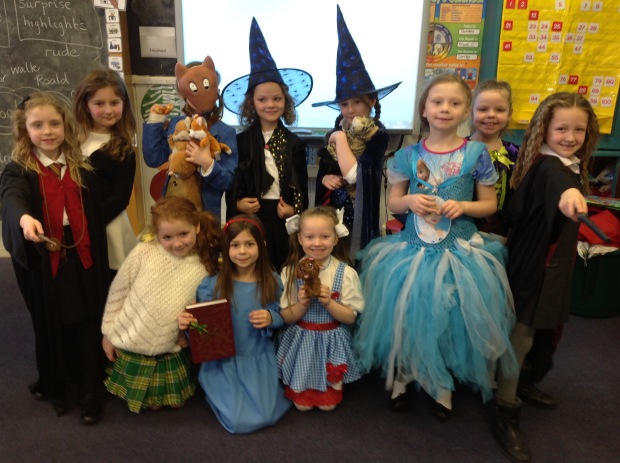